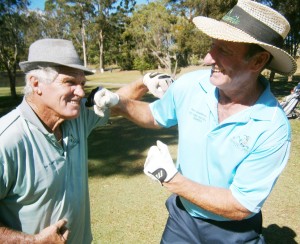 Ex boxer, Con Russell (left in photo) delivered a “knock out” blow to the opposition at Peregian Springs on Monday. His 43 points won the C-Grade division by a whopping 6 points. Con was kind enough to give us a shot by shot description at our working bee on Tuesday.

WORKING BEE:  Well done to all of the players who have been turning up to our monthly working bee’s.  The improvement and appearance of the course is quite noticeable.  We have a couple of major events coming up this year, and they are the perfect events to showcase our golf course.  The 1st event being the Cooroy Open in June, and then in September the Vets are hosting the District C & D Grade Championships.  With this in mind a few of us are planning a working bee on every Tuesday at 7.30 am for the next month or so.  You are welcome to join us, contact Don Clelland, Jim Henderson or Grant Smallacombe for details.

Wednesday’s “John Madill Toyota” monthly medal drew a great field of 83 players. The star for the day was B-Grader Terry Lyons who finished with a Nett 62. Also congratulations to A-Grade winner Ossie Osborne 65 and the man of the moment in C-Grade Con Russell with nett 65.

The Kevin Tonkin donated prizes for our 3 best golfers for the day, were Bob Noble with 78 gross winning on a c/b from Les Terrans, and Ossie Osborne finishing 3rd  with 80 off the stick.

I believe the sausage sizzle was very well received; a big thanks must go to Rod Booth who gave up his game of golf to do an excellent job of the cooking. 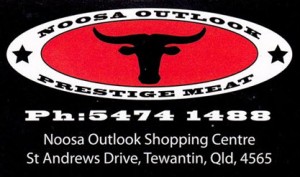 Thanks also to Graham Finn who took on the ‘eye watering‘ task of cutting up the onions and to Nick Kostalas who arrived back from his round early and assisted by putting the finishing touches to the sausages – it turned out most members liked their sausage burnt!

Also we have to thank Darren & Sally Prosser from “Noosa Outlook Prestige Meats” they not only supplied the sausages at a heavily discounted price, but also provided 5kg of them as a donation.

It would be nice if we could repay Darren with some patronage, give “Noosa Outlook Prestige Meats” a try, you will find them at St. Andrews Drive, Tewantin. While you are there make sure you tell them you are from the Cooroy Veterans’ Golf Club.

Terry Orman has seen the light and permanently relocated back to the Sunshine Coast – welcome back Doc.

We are looking for members to play in the Cooroy Vets Team for the District Team Challenge to be played at Pelican Waters on Thursday 22nd May 2014.

We need a team of 8 players plus 2 reserves.  All nominated reserves will play, but not be included in the main Team Challenge competition. A separate Single Stableford Event will be conducted for reserve players.

If you are interested speak to Grant as quickly as possible.