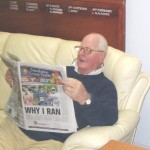 Why is Cooroy Veteran golfer John Kelly looking rather cool and chuffed with himself – read on.

John, John Stewart and Col Easton were out for a hit early Saturday morning.

John Kelly had a good drive on the 10th but lost his ball. Col decided to putt out while the two Johns were looking for the lost ball beyond the green. When Col went to lift his ball from the hole he found not one, but two balls in there.

Congratulations to John Kelly on your Hole-in-One.  Pity it was not an official competition but as he has already aced Holes 4 and 7 in competition I guess he isn’t too worried.

It’s getting to be a habit. Which hole next John?