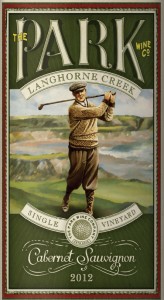 The Jim Penman Host Day Trophy was introduced some years ago by Jim Penman to encourage participation in Host Days, particularly host days at Cooroy.

Throughout the year Members win and accumulate points for participating in and their performance at Host days, both home and away.   At the end of the year the Member with the highest points tally is presented with the trophy – typically a pair of quality golf shoes.

To further encourage participation and engender interest throughout the year we are pleased to announce that smallPRINT Australia Pty Ltd, our host day NTP sponsors, have agreed to sponsor a unique bottle of wine (left) for the best performed Cooroy player (all in) at each away host day for the remainder of 2014 in addition to prizes on offer by the host club.

The bottle of wine will be presented to the winner at the next Wednesday competition day at Cooroy.

Our next away host day and first opportunity to win this unique wine, will be at Mt Coolum on 24th February 2014 – around 40 Cooroy members have nominated so far.

On Monday we played Host to Pelican Waters. The day was a huge success with 35 visitors & 50 of our own players taking part.

Six out of the best 10 scores came from Cooroy players.

On Wednesday we played an American Foursome.  The feedback I received after the game indicates that this event should be taken off the program next year.

Early players John Milligan & Graham Laing scored 58 points, and sat on a healthy lead for most of the day.  They looked almost certain to take out the main prize, but like it usually does, the late group of Ossie Osborne & Tony Foster trumped them by the slimmest of margins, and finished with 57.5.

The next working bee will be held next Monday, 17th February.  Volunteers will be assisting with the coring of the greens.  Meet at 7.30am at green keepers shed.

Feedback suggests the weekly Newsletter is well received but we are always looking for ways to improve it so are seeking feedback and suggestions on what new items you would like to see included – it’s your Newsletter after all.

And don’t be shy – contributions in the form of an article are welcome and of course keep the jokes coming.  We are particularly keen to know about humorous events on or about or off the course.

Remember – veterans’ golf is not simply about golf.  The camaraderie and providing a friendly, supportive social environment for members is essential to the spirit and success of the veterans’ golf community.

This year offers a great opportunity to play the Queensland based events as 3 will be played on the Sunshine Coast with the State 4BBB Championship being played a little further north at Bargara.

We have secured the Sunshine Coast District C & D Grade Championship for Cooroy Golf Course so mark your diary for September 2014.  This will be a great opportunity to showcase our golf course and organisational skills.

We will need volunteers on the day so if you are not intending to play let us know if you are willing to get involved.  Planning for the event will start shortly.


One of our members, Terry Lyons, is looking for some casual work – any kind of landscaping or labor work.  Terry is very fit and can do almost anything.  If you have a need for Terry’s services give him a call on 0409745307 or catch him in the club house.

Raffle: Brian Flynn, John Cairns, Terry Harrison, Peter Reilly.    NOTE: On other than Monthly Medal days if you are not present to collect you can do so the next time you play – your bottle of wine will be on the raffle table marked with your name.  You must be present to collect on a Monthly Medal day.     You can’t win if your name is not on the raffle sheet – so don’t forget to put your name down – it’s free!

98 Ordinary Members (male) and 9 Restricted Members (female) have renewed to date.    A reminder – if you need a 2014 Veteran Golf card see Rod.

We still have a number of members yet to play their first game for 2014 so renewal numbers will grow.

Not unexpectedly we have lost a number of members to residential relocation and age/health issues preventing them from playing but we still keep in touch with these members by retaining them on our Newsletter email circulation list.

Our average field size so far this year is 76 compared to 73 same time last year and 70 in 2012.  A very good start to the year and an exceptional participation rate.