Our best performer, Jason Egan, placed 3rd in B grade with 38 points on a c/b from Dave Lyons.  David Attrill also had 38 points but didn’t place. 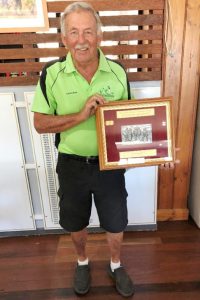 Thanks to Grant and John Kelly we now have a magnificent perpetual trophy for the ‘Old Course Challenge’ which was inaugurated in 2017 .  The winner gets to take the trophy home for 12 months.

Unfortunately 2017 winner, Lance Horn (picture), only gets to take it home for a week but long enough to show his wife that he is actually quite a good golfer.

The Cooroy Veterans Golf Club was formed in 1984 by foundation members Lionel Willett and Ed Otto.