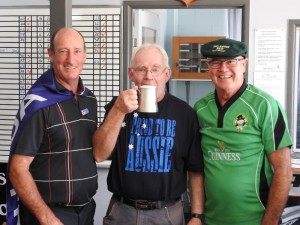 Congratulations and well done to the “True Blue Aussies” who were captained beautifully by Dave Lyons (photo – Dave middle celebrating with opposition captain’s, Grant and Jimmy). The team won by the barest of margins and finished with 383 points.  The “Aussie Attack” team played well within themselves and has vowed to take the opposition more seriously next year.  The “Aussie Attack” finished with 382 points, and the “International All Stars” finished with 369 points.  The “International All Stars” can look forward to the influx of Syrian refugees to bolster their numbers and therefore will be more competitive next year.

Forgot to mention at the presentation, but a sleeve of golf balls goes to Michael Loe (left in photo – with Tony Kershaw) who got right behind his team and was voted the best dressed for the day. 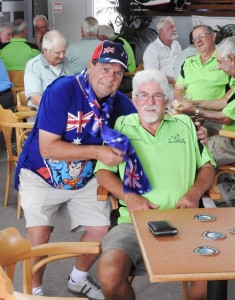 We now have 4 Stableford games left before the end of the year.  Peter Buchbach still maintains his lead in the “Most Consistent Stableford Score Competition” but Rob Nash is closing the gap as is now just 5 points behind.  Check how you are doing on the Leader Board at the Vets notice board.

Coming up on Monday is our visit to the new Maroochy River course. For many of you it will be your 1st game there, I hope you enjoy the experience of the links style course and I look forward to your comments.

Nick Kostalas is always bragging about having the fastest golf cart on earth.  He arrived at the clubhouse without his payload.  His golf clubs were back on the bridge at the 18th tee.

Bill Edwards zig-zagged his way 4 times across the 18th fairway.  The 454 metre hole must have seemed more like 600 metres and this approach is not to be recommended.

And of course Bob Noble couldn’t take a trick when he was almost through his swing when another player’s tee shot rolled up behind him and knocked his ball away from his strike zone. He was unable to stop his swing and had an air shot.  His playing partner (name withheld to protect the guilty) hit him up for a penalty.