Dave Collins must be well and truly over his recent buggy issues.

Last week playing off 19 and in B-grade, Dave scored

40 points for a win.  The handicapper was unsuccessful, as this week Dave was on 18, and in A-grade, and posted another credible 40 points for his 2nd win in a row.

Slow play is in the news again.  At one stage during our Wednesday game we had 4 groups on the 4th hole.  One has to wonder how this could occur.

I would like to remind all players to keep an eye on the group in front. If you are falling a hole or two behind there is obviously a problem.

If your group is responsible for slowing up the field it is common courtesy to let other groups through.

Thanks go to our prize donor – John Butler.  John is recovering from major surgery and won’t be swinging a golf club for a while but made an effort to come in to the club to present the prizes which is appreciated.

The previous rained off visit to Mt Coolum has been rescheduled to 5th August 2013 – 8:30 am shot gun start.

Nominations close on the 27th July 2013.   A nomination sheet is in the club house.

Given the current uncertain weather the deadline for completing Round 1 has been extended from 24th July 2013 to 31st July 2013.  Hopefully we will get a run of good weather between now and then.

We welcome new member Bruce Cowan, currently waiting to be re-handicapped after an absence from the game.

Bruce survived his first round of golf with Cooroy Vets playing with our former President, Kevin Olsen and prolific winner, Errol Radley so he should be able to handle any eventuality in future.  No doubt the fact Kevin and Errol are the current Pairs Match Play Champions slipped into the conversation somewhere during the day.

VETERAN GOLFERS ON THE ROAD 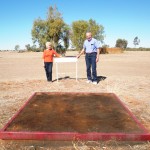 Bill and Jan Galvin on the 10th Ladies Tee at Longreach.