If you didn’t notice Ken Morgan at our Host Day on Monday, you weren’t there.

Ken’s outfit certainly was bright.  One comment that I did overhear was, “that the only thing louder than Ken’s outfit, is his voice”. And “no” Ken I won’t tell you who said it.

Anyway Ken I thought your outfit was great, just a word of warning though, “don’t allow Lynn to leave them out on the washing line for too long, as the harsh Qld. sun will fade them”.

It was a disappointing turn up by Tewantin/Noosa (11 players) but this will not occur next year as I have organized them to visit us along with Headland.  It turned out to be a good day though, as close to 50 of our own players turned up.

The numbers that turned up for the Working Bee on Tuesday 9th of July were a bit disappointing, but the ones that did show up were quality plus.

Approximately 15 trailer loads of debris and sticks were cleaned up from various creeks, and along the 1st, 16th, and 18th fairways.

The weather was not as kind as it could have been on Wednesday but we still managed 65 starters from the original field of 81.  Congratulations to the 16 players who have qualified for the single match play.

After a few recent complaints regarding Slow Play I would like to remind all players to keep an eye on the group in front.  If you are falling a hole or two behind there is obviously a problem.

Cooroy filled all the podium positions with the winners all posting scores above 40.  Graham Laing, Terry Lyons and Jimmy Henderson proved that being on the committee isn’t too much of a handicap by taking out runner up in their respective grades.   Graham and Terry also snared NTP’s.

Thank you to our prize donors – Col Easton, John Stewart and Kevin Crundall.

A cold, wet and for some of us, very miserable day was somewhat brightened by the sartorially resplendent Ken Morgan, this time in the form of an elegant chameleon.

Rumour has it his playing partners were somewhat distracted claiming Ken had undue advantage and sought relief from ‘an abnormal bright spot on a wet, overcast course’  but couldn’t find the appropriate etiquette rule, although use of unusual equipment seemed relevant.

Errol Radley continued his good form from Monday to take out A Grade and Col Easton posted a very impressive 44 points in testing conditions to take the C Grade podium.

The qualifiers and draw for this event were decided on Wednesday:

The above matches must be completed on or before 24th JULY 2013.

The rules for this annual event are:

Ordinary membership has now reached 123 with 19 new members so far this year – an excellent position.

VETERAN’s ON THE ROAD 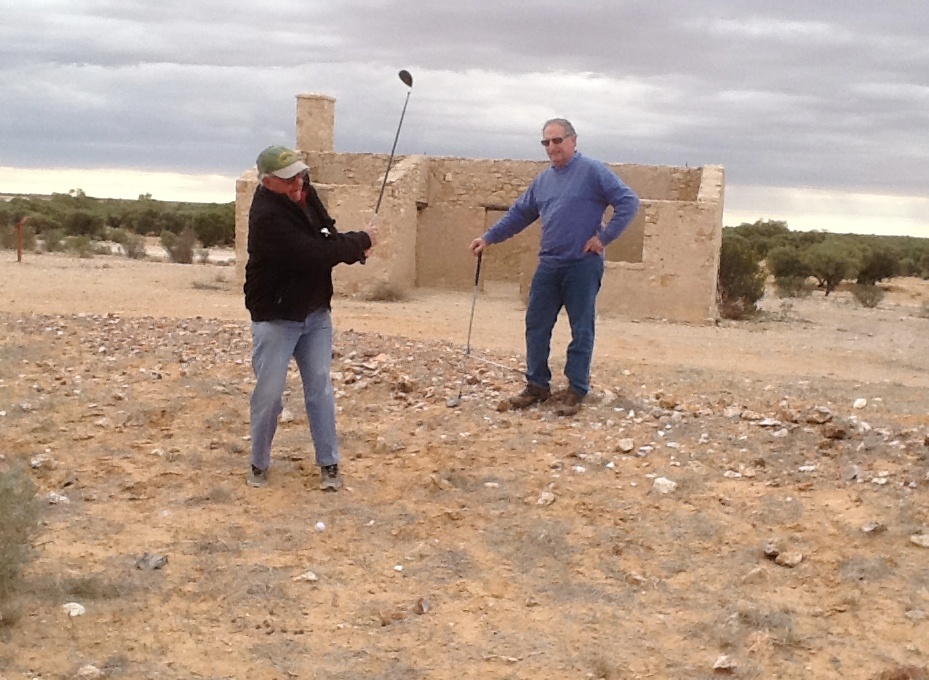 Glen Johnstone watches as Jim Gregg tees off between Birdsville and Bedourie.

Have we discovered the ruins of the once “Royal Diamontina Golf Clubhouse “????

This is a photo of Royal Samoa Golf Club taken by Don Clelland during his recent holiday. 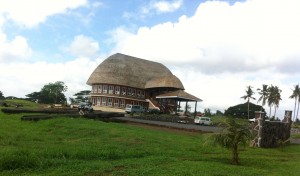 Don is heading back to Samoa shortly to play the course and will, of course, send back photos to prove it.