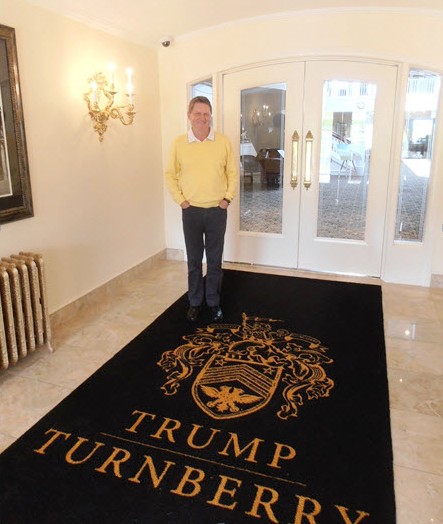 Ken McKay is on holidays in Scotland and has returned from a fantastic golf day out with his son Brad who generously bought Ken a round at the famous Turnberry course, the site of many famous British opens.  Here is Ken’s report on the day.

“The day was fine and sunny and I played in my hole-in-one Cooroy Vets shirt. We hired the clubs and they presented me with a brand spanking new set of Taylor Made clubs and bag to play with.  We played on the second course …..which was difficult enough.  The pot bunkers were a killer, but I got out in all but one with a single stroke.  The 18th has 11 bunkers, which gives you a sense of the difficulty level. For the record, my score was 95, I lost 2 balls and only found the rough on 3 occasions……not bad for a vet from Cooroy.

Donald Trump is determined to make this the number one course in the world and has invested 700 million dollars so far and there is no sense that he is slowing down.  The clubhouse and hotel is just mind blowing!” Click photo to enlarge.