Our St Patrick’s Day competition was played in perfect Ireland type weather, but with a bit more heat thrown in. 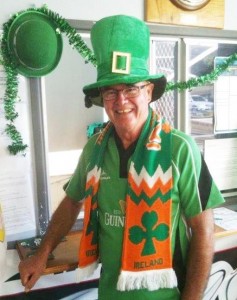 The Irish flavoured prizes proved very popular with all winners. Congratulations to Derek Clayton for his “Eagle” on the 8th hole.  The 110 metre shot was played from the 9th fairway, which makes it an even better effort, as the shot had to carry the trees.

Thank you to “The Leprechaun’s” (Jim Henderson, Rob Powell, Bob Read, and Dave Walder) for sponsoring the event.

While on the subject of our member sponsors I would also like to thank the following Kevin Crundall, Mike Miklenda, Paddy Knapp, Bill Galvin, John McNamara, Kerry Martin, Peter Reilly, and Phil Mason, who, with myself donated a sum of money so that we could pay our caterer Lindsay to cook our BBQ today.  Your generosity allowed all of our players to enjoy their game instead of being tied up with cooking duties.

While on the subject of member sponsors, there are still a few competitions that we do not have sponsors for this year.  In my time as Captain it has been quite noticeable that the generosity always comes from the same people and that some of our regular winners like taking but not giving.  Having said that, if you do win a prize, please go out of your way to say “thank you” to the sponsor, as this may be all it takes for them to continue their sponsorship next year.

For those playing at Headland on Monday, we will send out the Tee times as soon as we receive them.