On Monday we had our first trip to Caboolture and were treated with fine hospitality and a course in great condition. 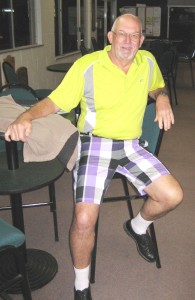 Our best players on the day were Rex Williams and myself, who both finished with 38 points.

While at Caboolture we renewed acquaintances with one of our past members in Ken Morgan (left – Ken’s dress sense hasn’t improved).  Ken is going well and enjoying his time there.  We will invite Caboolture to our club later in the year; this game will be played on a Monday with the date to be advised.

It is hard to believe that out of 79 players on Wednesday at Cooroy no one put their 2nd shot onto the green on the 8th to take out the “Captain’s Choice”.  Perhaps this was due to the excessive height of the grass surrounding the greens; we may have to raise the height of the NTP boxes, so they can be seen.

It seems Don Pigdon was rather keen to get off the course on Wednesday.  Either that or he miscounted as he bolted after 17 holes only to be called back by his playing partners to complete the round – which Don happily did.  Thanks to Don for his regular supply of Starfruit or Carambolas.  Don was one of the pioneers of commercial growing of the fruit on the Sunshine Coast.  If you haven’t tried them the juicy transparent flesh has a citrus quality with a floral accent and is delicious eaten fresh, made into juice or into a delicious chutney.