Our players performed exceptionally well to take out all of the major prizes on Monday when we hosted Horton Park.

Thank you to all of the members who assist with duties on Host Day’s.

We were lucky enough to dodge the rain on Wednesday, and had a good sized field of 78 including 4 visitors.

Bob Read showed that good hard work doesn’t hurt anyone when he came in with a whopping 46 points after spending the previous day doing building work on the new cart shed project.

Thank you to John Butler for being our trophy donor for the day, John has been sponsoring this event for several years, and also provides a special prize to the last placed player on the day. 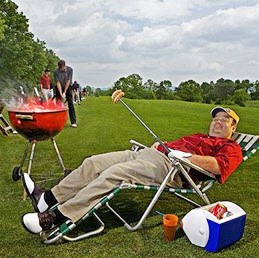 Jim Lucas, who has not been playing for awhile proved that timing, is everything, when he came back at the right time to take out John’s NAGA award.

I hope that everyone will come along to next weeks’ FREE sausage sizzle. The event is a 4BBB Stableford and is sponsored by “yours truly”. It is to be an 8.30 shotgun start, and we hope to see, not only our current players turn up, but also hope to see our past members, and any sick or injured players attend.

One such player currently on the injured list is Errol Radley who is recovering from a shoulder operation.  Errol has kindly offered to take my place on the BBQ.

The “Sausage Sizzle” and other things we do are possible because of the generosity of our donor members, and our Sponsors.  I would like

to remind all members that “Noosa Outlook Prestige Meat” supply the sausages for a heavily discounted price and also throw in 5kg for nothing.  They are also our sponsor for the NTP on the 15th hole, where they give a weekly voucher valued at $10.   Manager, Darren Prosser has recently extended this sponsorship period until the end of the year.   Call into his store and make sure you tell Darren you are from the Cooroy Veterans Golf Club.