Next Wednesday is a Single Stableford sponsored by John Butler – tee times from 7:00am.

Our next Sausage Sizzle will be held on 23rd July 2014 which is a 4BBB Stableford sponsored by our Captain, Grant.  NOTE: 8:30 am SHOT GUN start.  Grant and Rod will be doing the cooking but don’t let that put you off – they can batter bread rolls, cry over cut onions and burn sausages with the best of them.

A reminder nominations for the visit to Caloundra on Friday, 25th July close next week.

As mentioned in last weeks’ Newsletter we are looking for volunteers to assist with our running of the 2014 District Veterans ‘C & D Grade’ Championship at Cooroy on Monday 1st September 2014.   A VOLUNTEER Nomination Sheet is now available in the club house – just add your name to the sheet if you are available to assist and we will be in touch – it won’t involve anything strenuous.  The 2014 District Veterans ‘A & B Grade’ Championship will be held later in the same week at Horton Park on Friday, 5th September 2014.   This will allow members wishing to play in the A & B Grade Championship the option of also nominating as a volunteer for the C & D Grade Championship at Cooroy.  The PLAYER Nomination Sheets for both of these Championship events will be available shortly. 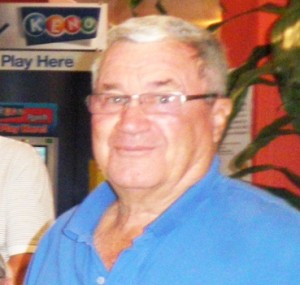 The 9 hole, 3 person Ambrose, invitation day to the Cooroy ladies was a great success.  We had 39 starters and the event was won by Peter and Sue Piggott and Judy Kitchen.  Cakes for morning tea were purchased from our sponsor “Richies Bakery- Cooroy” and seemed to be enjoyed by all.

Tuesday’s working bee went well and just in case you haven’t noticed have a look along the fence line of the 18th fairway, where many trailer loads of pine cones and rubbish were removed.  Great effort by Jim Lucas (pictured left) who isn’t playing golf at the moment to turn up and put in a big effort. For anybody interested there will be another working bee this Tuesday morning.

Wednesday’s Stableford event was generously sponsored by members John Dangar, Mike Smith and Andrew Dick. Thanks to you all, Andrew is of course enjoying life overseas at the moment.

Congratulations to Ken McKay for his star performance with 40 points to take out the B-Grade.

Congratulations to our 16 qualifiers for the Single Match Play round 1 of the finals has to be played by the 23rd July and doesn’t necessarily have to be played on a Wednesday.

Unfortunately I had to disqualify a player who came in with what may have been a winning score. Steve Hall had an incorrectly marked score on the 13th hole. Steve & his marker were both to blame for this error that shows that you should always spend that 1 or 2 minutes checking the cards after your game.

Slow play was again a heated topic at the end of play; I am addressing this, but in the meantime, do all you can to speed things up.

Ordinary Membership has now reached 128 for 2014 with fields averaging 77.