Ron Bourne (left in photo being congratulated by Grant wearing our new golf shirt) is our latest player to score a Hole in One.  Ron aced the 131 metre, 12th Hole.  It was Ron’s 1st Hole in One and he was very happy with his effort.

Spare a thought for Ed Boyd who on the 24th of August held the pin shot on 12th only to be beaten by Headland’s Jeff Jones who aced it.  Two days later Ed held the pin shot on the 15th but was once again beaten when our own John Sutcliffe (right in photo) scored his Hole in One.

This coming Wednesday, the 9th of September we play our MEMBER’S GUEST DAY.  It is a 4 Man Ambrose event where we encourage you to bring along a guest.  Past Cooroy Vets are welcome.  Your guest will only pay the same $12.00 entry fee as you do to play.  He needs to be aged 55 plus, and if he does not have a current handicap he will be given one at the Captain’s discretion.   There will be a Free Sausage Sizzle at completion of play and plenty of prizes on offer.

We are pleased to advise that Andrew Denny, Sales Manager, of our Monthly Medal sponsor, John Madill Toyota, will be joining us for a game of golf and the sausage sizzle afterwards.

Jimmy Henderson is delighted with our new shirts as he won’t have to wait until next years’ St Patrick’s Day to admire a sea of “Green” out on the course.

Captain Grant welcomed new member Lance Horn (middle in photo above) who joined us on Wednesday.

So far this year the Vets have paid some $8,500 in prize credits into Member Club Accounts with Cooroy Golf Club.  Members are presented with a certificate telling them the value of the prize credit.

Credits in your Club Account can be used to purchase goods and services from Cooroy Golf Club but cannot be used to pay membership subscriptions.

Bar staff can tell you how much credit you currently have in your Club Account.

It doesn’t earn interest sitting in your Club Account so spend it – you will be rewarding yourself and helping Cooroy Golf Club. 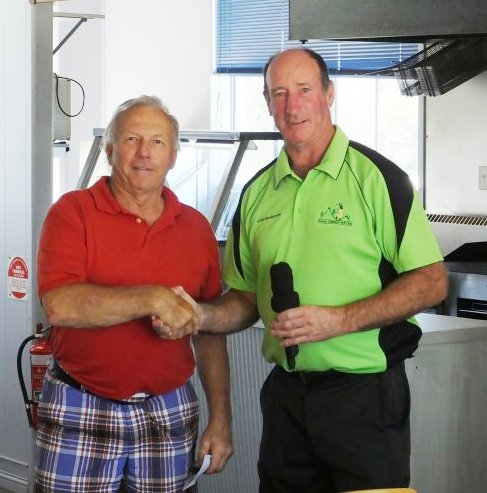 A strong contingent of 36 Cooroy players travelled south to Maroochy River for the carnival and, we are pleased to report, with some considerable success.

A great effort by early starter Brian Flynn saw him take out the District C Grade Champion title with 41 points – a memorable result as it was Brian’s first experience on this new course.  A great effort also by Michael Loe saw him claim District Runner Up in C Grade with 39 points.

Congratulations to all participating Cooroy Vets players – a great day and an excellent result all round for Cooroy.