Another big week in golf with 2 games played.   Monday’s visit by Caloundra could have easily been spoilt by rain, but the timing was perfect, as it started to rain just as the last group was coming in.  We had a field of 73 and the going must have been tough as the run down went all the way to 31 points.  Errol Radley was the player of the day and finished with 41 points. 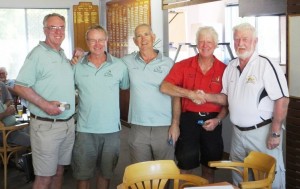 We had an even better turn up on Wednesday when 87 players competed in the Cooroy RSL – Sub Branch sponsored 4 Man Ambrose.  Scores were close with only 5 points separating the best and worst scores.  This is a very popular event and thanks’ must go to Bill Edwards (left presenting winners) for organizing and presenting the prizes.

The day was made even better when our one and only Life Member Jim Penman made an appearance.  A good thing Jim was around as I required some information regarding count backs that he was more than happy to share with me.

And once again it was a great effort by Rod Harper to make himself available to do the cooking duties.

I would like to remind all players that an 8.00am Shotgun Start means just that. YOU START AT 8.00am.  Some players have been jumping the gun and starting earlier which upsets the greens staff routine.  In future early starters will be disqualified.

Next weeks’ 4BBB Stableford is also the Qualifying Round for our Pairs Matchplay Championships.   Ensure you put a “Q” alongside your name prior to playing if you wish to qualify.

Nominations for our game at Peregian Springs on the 4th May have now closed. The tee allocations will be sent out when I receive them.

On our pin up board is the Nomination sheet for our visit by Horton Park and Tin Can Bay on the 11th May.

Welcome aboard to Greg Michael.  Make Greg feel welcome when you come across him.

There was a bit of early confusion on Monday when we thought we had a whole bunch of new Cooroy Vets members.   Turns out Caloundra have same shirt colour as we do.  We will make a decision on the new colour shortly although we need to stay in touch with Caloundra as they are also about to change colour.

RUNNERS UP: Kevin Tonkin, Col Easton, John Stewart. The Captain of this team requested that his name not be mentioned in the Newsletter so we have included a photo instead.

It’s not often that you have a count back for last place (Encouragement Award).  As one player commented if I’d known there was a count back I would have held back a bit – it was a good prize.

How to Start a Fight

When our lawn mower broke and wouldn’t run, my wife kept hinting to me that I should get it fixed.  But, somehow I always had something else to take care of first, the shed, the boat, making beer… Always something more important to me.  Finally she thought of a clever way to make her point.

When I arrived home one day, I found her seated in the tall grass, busily snipping away with a tiny pair of sewing scissors.  I watched silently for a short time and then went into the house.  I was gone only a minute, and when I came out again I handed her a toothbrush and said, “When you finish cutting the grass, you might as well sweep the driveway.”

The doctors say I will walk again, but I will always have a limp.