Andrew Dick and wife Gabby are currently enjoying an overseas trip taking in Mexico, Cuba and Canada.  Not one to miss an opportunity Andrew gladly grabbed the chance to play some golf in Mexico at El Campanario Golf Club in Queretaroa, a city 300 km north of Mexico City.

The first photo is of the 17th looking down from the tee.  The next photo is Andrew teeing off into the blazing early morning sun.  The last photo is taken from the 18th tee.  You hit across a gully (looks more like the Grand Canyon) to the fairway – a 180m carry.  According to the local news Andrew eventually made it across to the fairway.  Disappointingly Andrew didn’t wear our high-vis logo shirt on the day and so missed the opportunity to promote Cooroy Vets in Mexico.

And of course what’s Mexico without food.  Andrew’s found a sauce called mole the locals use on meat.  It’s a mixture of chocolate and chili so he’s threatened to bring some back for our sausage sizzles for those of you who like your sausages burnt and hot!

Unfortunately I have to dedicate this space once again to remind our members that turning up late to play is not acceptable.  Our nomination forms clearly state that registration is 30 minutes before hit off.  Late players need to consider that the committee members who man the starter’s box need time to close things down and prepare for their own games.  Being late is also not fair on your playing partners. As Captain I am normally busy enough during this period re-juggling the field to cover any late changes.  All I ask for is a bit of consideration to be shown towards others.  If anything unforeseen should happen that is going to make you late: THE GOLF CLUB HAS A PHONE.

If you would like to represent the Cooroy Vet’s please add your name to the list of nominations for this years “TEAM CHALLENGE” to be held at Pelican Waters on Thursday the 26th May. The sheet is on our notice board.

Thank you to the Cooroy RSL sub branch for donating a very good range of prizes for our Anzac Day 4 Man Ambrose.  Well done Tony Kershaw for assisting with the organising and to John Cairns for reciting the ode.  Best wishes also to Bill Edwards who has been our liaison man for many years. 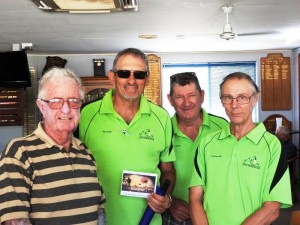