Next Wednesday is a Single Stableford sponsored by John Dangar, Andrew Dick and Mike Smith – tee times from 7:00am.   It is also the Qualifying Round for the 2014 Single Match Play.  Place a Q next to your name on the whiteboard if you want to play qualifying.  Rumour has it 2013 Single Matchplay Champion,  Terry Lyons, is keen to defend his title.

We are hosting the Sunshine Coast District Veteran Golfers Association 2014 District ‘C & D Grade’ Championship on Monday, 1st September 2014 at Cooroy – make a note in your diary.  The Nomination Sheet will be available later this month.  Hosting and running this event presents a great opportunity for us and Cooroy Golf Club.  We are looking for volunteers to assist so if you are not proposing to play but are willing to be involved let Grant or Rod know – it should be a great day.

My 1st Captain’s Corner since my holiday break, my holiday went well and thank you must go to not only the Committee, but also to the vet’s members who assisted with duties in my absence. I did catch up with Terry (ex vice-captain) & Sue Thompson in Torquay, Devon. Terry is struggling to play to his handicap over there and asked me to pass on his best wishes to everyone at the club.

On Monday we hosted Caloundra, the weather was fine, but great scores were rare, in fact we didn’t take out a major prize in A or B grade, but had 1st & 2nd place in C grade. The run down went all the way down to 31 points.

Wednesday’s “John Madill Toyota” monthly medal saw Peter Piggott the star performer on the day with a nett 65 to take out the A grade medal.

Our last working bee saw us a little bit down on numbers, perhaps it is the cold mornings. We will be holding a working bee on this Tuesday the 8th of July at 7.30 am, but feel free to turn up a bit later if you wish. We only do light duties, for approximately 2 hours before retiring to the clubhouse for Wayne’s special morning tea.

Thanks to smallPRINT Australia Pty Ltd for sponsoring NTP’s and Run Down.

Thanks to John Madill Toyota for their support in sponsoring our Monthly Medal events. 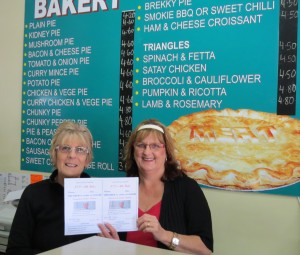 A big thanks again to our NTP sponsors Noosa Outlook Prestige Meats, Richies Bakery – Cooroy (left Betty and Judy) and Lian Scott Personal Travel Manager as they make it possible to offer additional benefits to members, not just on the golf course.

It is important these sponsorship arrangements are a win/win for all concerned so we encourage members to support businesses that support us.  If you have won a NTP voucher/prize or have used their services and had a positive experience let us know so we can let other members know.

From time to time these sponsors will have specials on offer so when they do we will let you know.

If you use the services of our sponsors make sure you let them know you are from Cooroy Vets.

This week Lian Scott has news about some great exclusive two for the price of one specials for travel for this year – they are for APT Europe River Cruise and Asia River Cruise.  Lian hopes to join us next week so if you are interested have a chat with her.