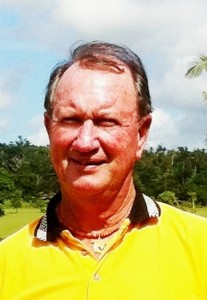 28 players made their way to Bribie Island for Monday’s Invitation Day.  Light rain fell for about half of the game, but it didn’t stop Don Clelland (left) from accumulating 39 points. Thanks to our sponsor smallPRINT Australia Pty Ltd, Don receives a bottle of “The Park” Cabernet Sauvignon for being the leading Cooroy player.

Wednesday’s 4BBB attracted a field of 79 players. The day’s prizes and balls were donated by your “Captain”.  Seeing it is a bit hard to thank one’s self, I will use this opportunity to mention that sponsoring an event is a great way to get involved, and it is a great way to show support of your club.  If anyone is interested in any type of sponsorship, please see either Rod Booth or myself.

While on the subject of Sponsors, next week we welcome three new sponsors from outside the Club.  From now on the 15th hole NTP will be “all in” event and will be known as the “ Noosa Outlook Prestige Meat NTP”. The prize will be in the way of a voucher that can be redeemed at their shop in Noosa Outlook Shopping Centre, St. Andrews Drive, Tewantin. This business also looks after us on our sausage sizzle days, so call in there, say hello to the Manager Darren Prosser, and tell them you are from the Cooroy Veterans Golf Club.

Our other sponsorship is for the 10th hole NTP, this will also become an “all in” event and will be known as the “Lian Scott Personal Travel Manager NTP”.  Lian will be at the club at the conclusion of play, she will present her prize and give a brief talk on how she can assist you with any of your travel requirements.  Lian’s prizes will be an assortment of golf goodies that she has obtained from overseas.

We have also secured a voucher sponsorship for the 4th hole NTP (all in) from Richie’s Bakery which has shops at 20B Maple Street, Cooroy, 108 Poinciana Avenue, Tewantin and Shop 5, No 2 Etheridge Street, Eumundi.  Richie’s also look after us for bread rolls for our sausage sizzles so if you’re in one of their shops let them know you are from Cooroy Vets.

Congratulations to those who qualified for the pairs championships.

Our next official working bee will be held next Tuesday the 6th of May.  All volunteers to meet at the Green keeper’s shed at 7.30am.  The book must be signed prior to starting & see Kirsty or myself before going out to work. Light duties only, and don’t worry about Don Clelland (aka ‘chainsaw’ – photo above so you readily recognize him) as we are going to send him out on his own.

The Qualifiers and Draw for the Pairs Matchplay is now available under a separate Golf News ‘post’.  The date for completion of each round is included.

For those not familiar with this ‘trophy event’ here is a little background to the Norman Garth Baker Shield.

“Norman Garth Baker, or Garth to his friends, a Pomona resident and former Pomona High School teacher, was a long-time member of both Cooroy Golf Club and Cooroy Veterans’ Golf Club.

Garth, a cancer sufferer, passed away in Gympie on 23rd September 2009 aged 79 years.

A big thanks to Grant for sponsoring the prizes for the day.