We need nominations for the invitation to Cooroy Women to join us on 7th July for a 9 Hole 3 Person Ambrose. The men’s nomination sheet is available in the club house.  The competition fee is $5.00.

We are hosting Horton Park at Cooroy on 14th July 2014.  Nomination sheet will be available shortly.

Our visit to Caloundra scheduled for Friday, 25th July, has been deferred until later in year at request of Caloundra.  The new date will be advised shortly.

IMPORTANT NOTE: Commencing with our Monthly Medal on 2nd July Winter shot starts will be 8:30am rather than 8:00am to allow ground staff enough time to complete course set up. 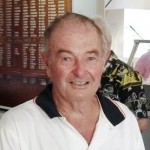 27 Cooroy players made the trip down to Woodford.

A clear crisp winter day saw a red hot performance by Brad Lavender to take out the overall winners spot with his highest ever Stableford score of 47 points.  Nevertheless Brad was just a tad disappointed saying he left a few shots on the course.   Brad also won the bottle of The Park Wine Company Cabinet Sauvignon wine for our best performed player in an away host day/invitation competition sponsored by smallPRINT Australia Pty Ltd.

Other noteworthy performances were:

Thanks to The Bush Boys for their generous sponsorship support.  This is the second time this year they have sponsored an event. They will do so again later in the year.

It was great to see Chris Simpson (left) back enjoying a game of golf after some serious shoulder surgery following a fall back in January this year.  Chris wisely made sure his drive on the 5th didn’t go anywhere near “that creek”, the cause of his fall.  Chris reckons he now has so much metal in his shoulders he no longer needs steel shafts on his golf clubs.

Brad Lavender followed up Mondays great performance at Woodford with another great round of Stableford golf taking out C Grade with an excellent 42 points.  It was enough to convince Brad he should stay with golf after thinking about giving it away to take up Croquet or Bowls.

Despite recent surgery Kevin Olsen put in a stoic performance to take out A Grade with 39 points.