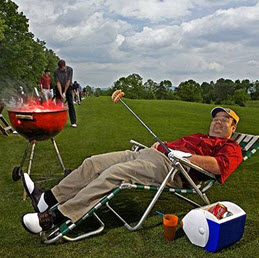 Veterans’ golf is not simply or solely about golf or indeed winning – the camaraderie and providing a friendly, supportive social environment for members, both past and present, is essential to the spirit and success of Veterans’ Golf.   It is a great way to meet new friends and provides a platform for social interaction between people from all walks of life in the same age demographic irrespective of your golfing ability.

The Vets committee has been considering ways of further supporting this important concept and in particular providing an opportunity to stay in touch and engaged with past and present members (Vet friends) we don’t see very often, or at all, for whatever reason or who are injured or ill and unable to play golf.

To this end we are discontinuing complementary birthday drinks and instead will provide a Sausage Sizzle after our Wednesday competition on a number of occasions between now and the end of the year to which we will be inviting these ‘Vet friends’.

The sausage sizzles will be held on a shot gun start day so players arrive back at the clubhouse around the same time to enjoy a catch up with old friends, metaphorically speaking of course, some socialising and a bit of fun.   The invitees will join us for the sausage sizzle part of the day.

The first of these sausage sizzles will be held on Wednesday 2nd APRIL 2014.   We have organised a butcher source that will donate some sausages as part of the deal.

Tuesday saw us leave Cooroy Golf Club in the rain and head off to Tin Can Bay.   By the time we arrived the rain had stopped and we played our game in the sunshine.  Jimmy Penman was the best Cooroy player on the day; he finished with 37 points, and picked up the smallPRINT sponsored bottle of “The Park” wine.

Our Irish 4 Ball Stableford on Wednesday was played in very good spirit.  Jim Henderson dressed perfectly for the occasion and flew the Irish flag with great pride. Our winning team with 109 points was Ron Blount, Brian McMillan, Ray Leslie and Geoff Kerr.

Thanks must go to our sponsor’s for the day “The Leprechauns” (aka Jim Henderson, Steve Howes & Dave Walder).

Also thanks to Nick Kostalas for donating a dozen golf balls that were used as prizes for the NTP on holes 4,6,and 7.  Well done Nick, and if anybody else finds themselves with an excess of golf balls, we would welcome them as sponsored prizes.

KEEP YOUR CARTS AWAY FROM THE GREENS

It appears that some players are not taking any notice of the cart driving guide that has been given to all cart users.  Please have a bit of respect for the great job our green staff do on our course.

UPDATES “FROM THE SHED“

If you are interested in knowing what’s going on around the course read Kirsty’s posts on the eNotice Board of the website.

There was a bit o 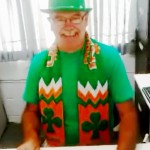 f a tongue in cheek protest that the event wasn’t taken seriously enough – arguing that being an Irish event there should have been green or perhaps orange Guinness, the worst score should have won and the ball run down should have been a ball run up but it was promptly dismissed by the match committee.

Dave Walders golf cart encountered an electrical problem heading up the 7th and simply stopped – it must be Irish also!   The group behind were cursing at how long they were taking without realising the problem and motored down to see what was going on.  Luckily Alan Emery was able to provide what looked remarkably like a ‘Swiss army knife’ and with Bob Brookfield looking on nervously (it was a long walk back to the club house), Dave skilfully fixed the problem with the comment “I mightn’t be able to play golf (ha ha) but I can fix a golf cart”.