Wednesday, 25th June 2014 (Tee times from 7:00am) – 4 Man Ambrose sponsored by “The Golf Tragics” so start getting your team organised.

Nominations for hosting Caloundra at Cooroy on Monday, 30th June 2014, close on 25th June 2014 so still plenty of time to get your name on the Nomination Sheet.

The men’s nomination sheet for the invitation to Cooroy Women to join us on Monday, 7th July 2014 is now available on the Vets Noticeboard.   It is a 9 Hole 3 Person Ambrose with a shot gun start at 8:00am. Morning tea will be supplied.

Ed Krop joins us as a new member and is off to a good start winning a ball in the run down in his first game with the Vets.

Thanks to Len and Dave for their generous sponsorship support. 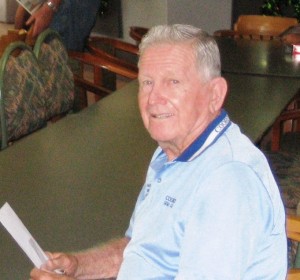 The ‘Little Master’, Jim Penman (left), is back in the winning circle taking out A Grade on a count back from ‘Ozzie’ Osborne.  Jim reckons he left a few shots on the course and in a recent event carded his best score for a long time – 74 off the stick – considerably less than his age!

A very good performance also from Bill Hesse to take out B Grade with 41 points, the best of the day.

I played in the same group as Ian Mulhall and saw how well he played to deservedly take out C Grade on a count back from long time Vet Lionel Willett.

Many of you will remember Terry Thompson, our most recent past Vice Captain, who returned to UK in late 2012 and 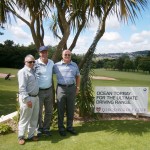 currently lives in Torquay with wife Sue about a good 3 iron from Torquay Golf Club.

Grant and Denise Smallacombe caught up with Terry and Sue for lunch and a few pints of the local ale at Torquay Golf Club.  Terry Harrison happened to be in the area so joined them also.

Unfortunately there wasn’t time for a round of golf, even between pints, but they did walk outside on a very fine day to take a look at a very nice golf course and for the obligatory photo.