Cooroy Golf Club has announced the appointment of Paul Dawson as Greens Supervisor.

Previously Paul was 2IC to Kirsty.

Our most prestigious competitions are known as “Trophy Events”.  These events are played annually and are open to financial members of Cooroy Veterans’ Golf Club only. 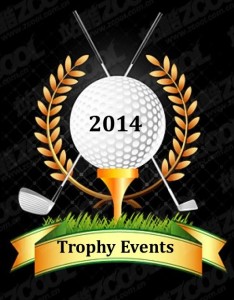 We are pleased to announce that prizes for 2014 Trophy Events will be as follows to reflect the prestige and standing of these events.

With the exception of the Jim Penman Host Day Trophy event (which is a donated prize) the winner will be given choice of the following to the value indicated:

It should be noted that amateur status rules for golfers prevent a winner from accepting a money prize of any amount.

Another excellent effort by the Vets to support this raffle to raise money to contribute to the cost of the new hire cart shed.  If you are not already aware the new cart shed will house an additional 11 hire carts and is being constructed directly opposite the existing hire cart shed.  Once completed Cooroy Golf Club will have 22 hire carts available opening up more opportunities for small corporate and social/charity days.

The raffle raised $170 (net) and was won by Glen Johnstone.

Thanks go to Grant Smallacombe for initiating the raffle and organising the meat tray through Noosa Outlook Prestige Meats.

SAUSAGES – SAUSAGES- SAUSAGES – it was great to see such a great turn up for our 4BBB Sausage Sizzle.  I believe we had 89 players, including 3 visitors playing.  Good to see Garry Sheales who hasn’t played for awhile, Graham Bryant who hasn’t played for 2 years, and wounded players Don Pigdon and Errol Radley join us.   Last week Errol offered to do the cooking so I could play golf, thanks for that Errol, and I think we would all agree, you did a great job in cooking on the BBQ.

Rod Booth once again sacrificed his golf so he could get the BBQ underway and spread all those bread rolls.  So thanks to Rod and also to Jim Henderson for his time spent in picking up all the goodies and cleaning things up.

A timely reminder to all cart users, please use the designated cart tracks and I don’t know how many times I have to tell you, “have a bit of respect for our hard working green staff by keeping carts away from the greens”.

WORKING BEE: Our next working Bee scheduled to be held on Tuesday the 29th of July has been deferred to a later date.

Thank you to the event sponsor, Grant Smallacombe, who donated all of the prizes for winners, runners up, run down, Captains choice and non sponsored NTPs.