The Pairs Match Play final was played yesterday with Les Arthur (right in photo) and Dave Chapman (left in photo) taking it out against John O’Donoghue and Dale Rickard. 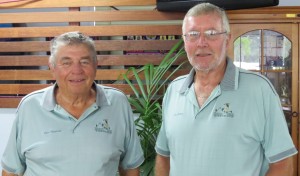 With Les and Dave 1 up with 1 to go John and Dale ensured the match went right down to the wire in difficult conditions – the last 3 holes were played in pouring rain.  With the last hole halved Les and Dave took out the final.

From all accounts the match could not have gone much longer as it was 5:00pm and getting very dark on a wet and gloomy afternoon.

Congratulations also to John and Dale for making it through to the final and putting up a spirited effort all the way.