The women of Cooroy Golf Club participated in Tee-off for Breast Cancer Research on Thursday, 23 October 2014. 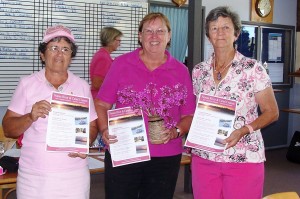 We raised money by purchasing Escape Tickets which could be used instead of putting or to get us out of trouble without penalty.  In conjunction, we ran a raffle which the Cooroy Veterans also supported.  Previously, thanks to the generosity of Noosa River & Canal Cruises we went on an evening cruise, with all takings going to the cause.  Cooroy Golf Club also made a donation.  In all, we raised $1,669.00 to send to the Breast Cancer Institute of Australia.  What a truly marvelous effort for such a small club!

On the day we had just 32 players in the field, and we played a Bisque Bogey Vs Par.  It took quite a bit of concentration to work out where we were going to use our handicaps and how we were going to use our “freebies”.  There was quite a bit of hilarity as well.  Congratulations to the winners, Shay Zulpo (center) (+14), Carmel Clark (right) (+11), and Assunta Easton (left) (+10 c/b) who each won Cruise vouchers presented by Noosa River & Canal Cruises.

One of the happiest women there today though, was Maria Taurer who had a Hole-in-One on the 6th hole.

Congratulations to all who helped to raise funds for research into a disease which has touched many of us and our families.