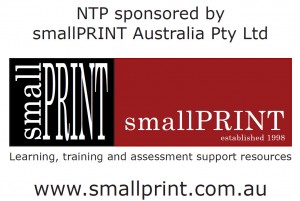 We are pleased to welcome smallPRINT as our NTP logo ball sponsor for the remainder of 2013 through the efforts of our Captain, Grant Smallacombe.

A good field of 78, including 42 from Horton Park, enjoyed a great autumn day of golf.

The day wasn’t without incident though.  Without warning Dave Collins motorised push buggy took a detour into one of the deep ponds in Amen Corner leaving nothing visible but Dave’s glove floating on the water.  The glove was quickly recovered in case it was thought Dave might still be attached to it but the buggy was another matter.  The problem was solved when an intrepid member of the green staff arrived, stripped off, plunged into the cold murky depths and recovered the buggy, much to Dave’s relief.   After a bit of drying out, Dave and the wayward buggy were reconciled and back on the course on Wednesday.

Now back to golf – winning honors were evenly shared with Cliff Black, Horton Park, taking out A Grade with 40 points and Ron Blount (now also known as Ronnie Biggs) taking B Grade with an impressive 44 points.   Ron is very keen to get his handicap down to 22 – the way he’s playing he’ll get there very smartly.  Ron took out a B Grade Stableford last month with 44 points.

Dave Walder (there’s that name again) with 39 points and Bill Hesse with 37 (c/b) points finished runners up in A and B Grade respectively.   Bill also picked up a bottle of wine in the raffle.

As a result of securing the NTP sponsorship NTP winners now collect 4 balls each which can be shared with others in their group.

Brad Lavender, Bob Brookfield, Dennis Guion and Len Highland are taking time off to address medical issues – mostly knee problems.   Maybe we should round up a few more and see if we can negotiate a group discount.

Here’s to speedy recoveries and return to golf.

Don Pigdon is back looking fit and well after remedial work on his knee and ready to resume responsibility for taking out the NTP markers.

Steve and Jimmy’s “helpful” example score card and “there are no rules” ensured all cards eventually passed scrutiny, although Captain Grant was left scratching his head at times at the interpretations possible.

Congratulations to the winners Col, John, Bob and Dennis, making the step up from runners up in this event last year – proves how popular it is – so popular we will include it again in next years’ program!!!

Thanks to our member sponsors, Jimmy, Steve and Dave.