On Monday 45 players visited the new Maroochy River course and although none of our players featured in the major prizes, we still had quite a few who played well.  Our best player on the day was Lionel Willett who finished with 41 points. 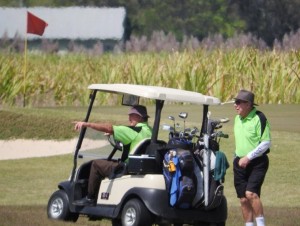 
Errol Radley still holds the lead in the Jim Penman Host Day Competition despite not being able to better his score at Maroochy River.

With 2 Away Host Day’s remaining there are still plenty of opportunities for many players to finish in the top 10 and therefore win a prize at the end of the year.  The updated Leader Board is on display on the Vets notice board at the club.

Our October “John Madill Monthly Medal” was played on Wednesday with a total of 83 players taking part.  Medal honors went to Michael Loe, Greg Michael, and Hasse Andersson.  If you have not already won a medal this year, next month’s round on October the 28th is your last chance to secure a place in the Medal of Medals that is played on the 2nd of December.

We thank John Madill Toyota for their sponsorship support for our Monthly Medal.