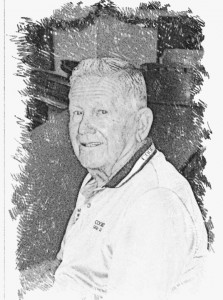 If you saw Jim Penman’s (left) team congregating around the first pine tree, just off the 1st tee. No! They weren’t having a tree planting exercise to commemorate Anzac Day; they were in fact playing their second shot.

Our Anzac Day, 4 Man Ambrose was played in perfect conditions. A big thanks must go to our sponsors, “The Cooroy RSL Sub Branch”, and also to Bill Edwards for organizing the prizes, and for paying respect to the Australians who served and died in all wars.

The team containing new member Steve Hall, returned member Ed Boyd, and Committee Members Mike Smith and Andrew Dick had a good round and won the day with 52.5 points.

Next Wednesday is a 4BBB Stableford, it also is the Qualifying Round for our Pairs Match Play. To qualify for match play you are required to place a Q next to your pair prior to playing. The match play will be decided over the next 8 weeks with the final being played by the 25th of June 2014.

Good luck to all those playing at Bribie Island on Monday, don’t forget it is a 9.00am shotgun start.  Cooroys’ best player will win a bottle of “The Park” Cabernet Sauvignon that has been kindly donated by smallPRINT Australia Pty Ltd.