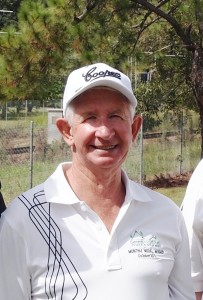 On Monday we played our Host Day at Nambour, it was a good day and great scores were scarce, our leading player and therefore winning a bottle of “The Park” Cabernet Sauvignon was Peter Piggott with a credible 36 points.

Wednesday’s Stableford competition was sponsored by Dave Chapman.  Dave is one of our many player sponsors.  Unfortunately Dave couldn’t stay to do the presentation, so if you were amongst the winners, don’t forget to thank him.   Rob Nash (left) who hasn’t appeared in the winners list for awhile was the star and won the A-Grade with 44 points.

Once again our entire field failed to take out the “Richies Bakery” NTP on the 4th hole.

It was great to see Lian turn up and present the “Lian Scott Personal Travel Manager” 10th hole NTP that was won by a very happy Ray Glover.  The 15th hole is sponsored by “Noosa Outlook Prestige Meat” and was won by Jon Sendall.

Best of luck to our 10 players who are representing the Cooroy Vets by taking part in the District Team Challenge at Pelican Waters on Thursday. Last year we finished last, so are hoping for better things this year.

Thank you to Col Easton who donated a box of 12 Srixon golf balls that he won as a NTP prize in last weeks’ State Championships at Mount Coolum.

And also thanks to Alan Humphries who donated half a dozen Srixon balls that he had previously won.

The donation of golf balls and other prize donations make it possible for your Committee to direct our funds into other areas that are of benefit to the Vets, like the Sausage Sizzles etc.

I am taking a break, and will be overseas for a month. You will be in great hands while I am away with Vice-Captain Jim Henderson taking the reins.

The annual invitation to Woodford is on Monday, 16th June 2014.  The Nomination Form is now available in the club house.

We will car pooling this year rather than providing a bus.

The nomination sheet is available in the club house.  We are looking forward to a large field.

Nick Kostalas is travelling in North Queensland enjoying some nice warm weather – hopefully we will get some photos shortly to prove it.