We had 22 players who ventured to Nambour on Monday, and as you know it rained most of the day which made playing conditions very tough.  The Nambour course was in great condition other than being wet.  A very creditable 17 of our players completed the 18 holes.  The best score returned by a Cooroy player was 35 points by Ed Krop. 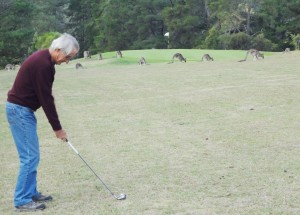 Bob Noble wins for a change but was assisted by the injury to playing partner Kevin Tonkin who took a tumble on the 1st hole.   Bob’s 43 points probably would not have been enough if the inform Kevin Tonkin had been able to complete his round.

Thank you to our trophy donors in Les Arthur, Dave Chapman and Denis Guion.  The other two winners were B Grade – Ed Boyd 44, and C Grade – Paul O’Hare with 43points.   At least on Wednesday Ed didn’t have to contend with this sort of ‘local hazard’ encountered during a game at Mt Beauty in Victoria whilst on holidays.  Ed says he deftly chipped under the hazards to get on the green.

Yes! on Thursday our team played in the SCDVGA Team Challenge and after finishing last on the previous 2 occasions, I am happy to report that we are on the way up. This year we finished 2nd to last and only 23points behind the winning team of Mt Coolum.   Our leading player was Graham Laing who finished with 31 points. Pelican Waters put on a great day and the course was in top condition.