Fine weather and fine golf by Col Easton were the order of the day for our visit to Headland on Monday.  Col finished with 46 points and won a pair of golf shoes for his trouble.

The Headland committee and I are working on moving this game to perhaps March 21st next year, so that we don’t have to play just after the greens have been renovated.

With only one game remaining in the Jim Penman Host Day Trophy, Errol Radley still holds the lead.  Errol is on 372 points and is 13 points in front of nearest rival Tony Foster.  This means that if Errol doesn’t score more than 34 points at Noosa, Tony would have to score 43 points in that game to overtake him.

It is not possible for anyone else to make up the difference.

It is still possible for a few players to sneak into the top 10.  Col Easton went from 13th place into 5th place this week when his 46 points replaced a 20 point score.

Wednesday’s game off the Red Tees provided a bit of variety from our normal Stableford game.  The change certainly suited Jim Gregg who amassed 47 points to take out the B-Grade.  The 2 par 5’s, come par 4’s certainly proved a challenge, and nobody found the green with their 2nd shot on the 16th to take out the Captain’s Choice.  The award (3 balls) through a lucky draw went to Dave Chapman. 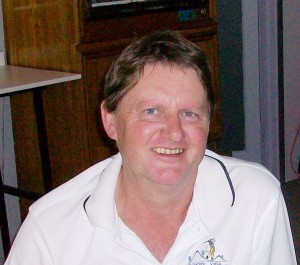 2nd HOLE IN ONE to KEN McKAY (left) in 5 months.  Yes Ken does it again, this time on the 12th.  Well done Ken, perhaps the trifecta is just around the corner.

Thanks’ again to Kevin Crundall and John O’Donoghue for being our prize donors for the day.

Peter Buchbach holds a 2 point lead over Rob Nash in “The Most Consistent Stableford Score Competition”; in 3rd place is John Stewart.  There is only one more Stableford game on the 25th November that will count for this award.  We play a Stableford game on the 11th of November, but as a portion of our players will be at Noosa that day, this game has been removed from the award.

Next week is our 4BBB and there is a free hamburger & drink for all players at Marty’s Hut.  Our trophy donors for the day will be Grant Smallacombe (major prizes), and Nick Kostalas (NTP & run down balls). Thank you Nick for your generosity and even though you won’t be in attendance, we will give them out on your behalf.

We have 23 nominations for our game at Noosa on the 11th of November.  We are allowed to take 24 so there is room for another player.  It is also a good idea to have a few reserves as quite often there are cancellations.  If you are interested, add your name to the nomination sheet on the Vets pin up board.