Best wishes to all members for 2015, our first two games seemed to be enjoyed by all and both were played in fine weather.

On Monday 33 players made the trip to Pelican Waters.  The PW course was in great condition, but as usual most of our players found the going difficult.  There were however a few stand out scores and the best of these came from Terry Lyons 39, Graham Laing 38, and Laurie Staples (picture left) 37 points.  Later this year we compete in the Sunshine Coast District Veteran Golfers Association “Club Challenge” at Pelican Waters.  The past 2 years has seen us finish last on both occasions. This year we need to put in a big effort so that someone else finishes up with the “wooden spoon”.

On the subject of our Host Day Competition, I would like to announce the following changes to this years’ scoring and the prizes for the 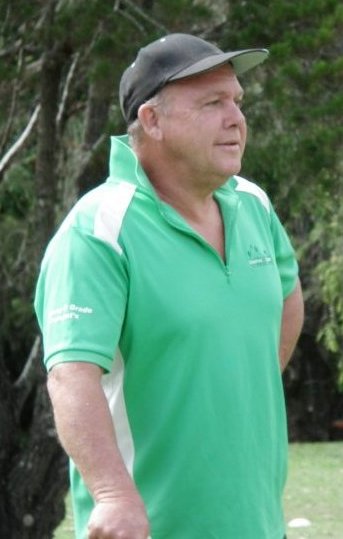 Jim Penman Host Day Player of the year award.   There are a total of 10 away games and 7 home games.   Your score will be worked out on the total Stableford points for the best 10 games you participate in. To qualify for the prizes on offer you will need to play in a minimum 5 away games and 4 home games.

This year there will be prizes on offer for the top 10 placed players.  Our Life Member Jim Penman has been generous enough to donate the major prize, and the vets will provide prizes for the next 9 players.  A leader board will be on display on our notice board from next week.  The new scoring system will make it a lot easier for us to run and we are hopeful that the increase in prizes will add more interest in the host day competition.

You are forgiven if you thought you were seeing double on Wednesday, Peter Mounsey had his younger twin brother Don join us for a game.  Don is on holiday from the Lakes district in the UK and like a true twin finished with the same score as Peter.

We are very pleased to announce the following sponsors have agreed to continue in 2015.  Please continue to support them.

Well, a Girl Potato and Boy Potato had eyes for each other, and finally they got married, and had a little sweet potato, which they called ‘Yam‘.

Of course, they wanted the best for Yam.

When it was time, they told her about the facts of life. They warned her about going out and getting half-baked, so she wouldn’t get accidentally mashed, and get a bad name for herself like ‘Hot Potato’.

Yam said not to worry, no Spud would get her into the sack and make a rotten potato out of her!

But on the other hand she wouldn’t stay home and become a Couch Potato either.

She would eat properly so as not to be skinny like her Shoestring Cousins.

They sent Yam to Idaho P.U. (that’s Potato University ). So that when she graduated she’d really be “in the Chips“.

But in spite of all they did for her, one-day Yam came home and announced she was going to marry Richie Benaud.

They were very upset and told Yam “You can’t possibly marry Richie Benaud because he’s just ……..

Are you ready for this? Are you sure?