It was great to see the clubhouse filled before and after the game with such an enthusiastic and raucous crowd of Vets obviously enjoying themselves at our final program event for the year.

So they had some inkling in advance Grant briefed players on the ‘variety of contests’ on the course before they headed out to play at 8:00 am for a shotgun start; for some of us knowing in advance didn’t help!  The whole day went very well thanks to the planning and advance preparation, by Grant in particular.  We played 18 holes of golf, completed a daily competition and presentation, fed around 100 people, presented annual trophies, had a few drinks and laughs and were able to wrap up a successful day just after 1.00 pm.

Feedback suggests everyone enjoyed the Thai lunch provided by Thai Tong Restaurant, Yandina.  Thank you to Tanju and his two helpers for their efforts.  Thai Tong Restaurant has confirmed they will be a NTP sponsor again in 2017, and with increased prize value. 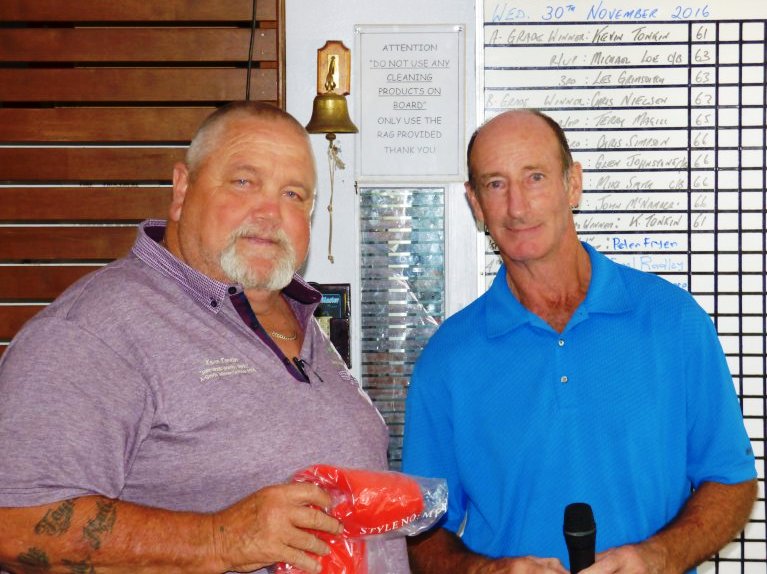 Big Kev Tonkin (left) has had a memorable 2016 as he continued his good form taking out A grade on Monday’s host day and on Wednesday as a member of the winning Xmas 4 Man Ambrose team and taking out longest drive on 9th, NTP on 15th, NTP on 14th, as well as 2016 Medal of Medals winner.  Any wonder Kev looked a little exhausted on Wednesday; what a golf year to remember.

We kick off our three competition Holiday Season Stableford next Wednesday.