On Monday our players enjoyed a host game at Horton Park.  Peter Piggott was the best of our players with 39 points. Peter therefore collected a bottle of “The Park” wine (donated by sponsor, smallPRINT Australia Pty Ltd), for being the leading Cooroy player on the day.

Wednesday’s 4 Man Ambrose followed by the sausage sizzle seemed to be enjoyed by the majority of our players.

With so much going on I forgot to mention our main sponsors for the day, so thanks’ must go to “The Golf Tragics”, who now consist of Rod Booth, Kevin Crundall, Brad Lavender and Graham Laing. These sponsorship and others like them are the reason our club is able to fund things like the sausage sizzles etc.   So well done to those who have contributed. 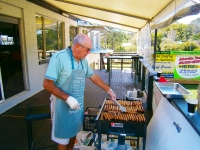 While on the subject of good people, I would like to mention the great effort by Steve Howes (pictured left) who not only manned the BBQ, but also helped out in other areas during the day.  Steve was Vice-Captain when I took on the job and was a great help then and still goes out of his way to assist where he can.  Not bad for someone who is not on the current Committee.

It was good to see a few of our members bring along a guest to join us for the day. There were some good scores and a few impressive efforts on the novelty holes.

Interestingly, no one managed an Eagle on the 16th Eagle Challenge Hole.

Dave Lyons and his Nudgee team did record an eagle 2 on the 17th hole but never mentioned it.

The Marshmallow Drive went to Laurie Staples or Don Clelland or someone with an impressive 45 metres.  In all the excitement of this contest it got missed off the Results sheet so not recorded who won it!

And Brad Lavender is still trying to work out how many millimeters his tee shot was from the straight tee line on the 2nd hole.  He did mention about 3 inches.

John O’Donoghue, in a very generous gesture has donated 50 golf balls to us that will now be used as prizes, thank you for your donation John.

On the sick list lately has been Rob Powell, I am pleased to say that Rob is out of hospital and is spending some quality time with his son in Brisbane.  We look forward to seeing Rob back on the golf course soon.

By all accounts Club Patron Jim Dunstan’s health has improved.   And the ever popular Marty gets better with every schooner of “black” he drinks.

Finally I would like to advise that Ed Otto has not been too well lately, he is in fact in the ICU ward at the Noosa Hospital at the moment.  For some of our newer members that may not know Ed, he was made a Life Member of the Cooroy Golf Club in 2010.   Ed did a lot of work in previous years that has helped make this club what it is today.  We wish him well.

A reminder that our Cooroy Vets 2014 AGM will be held on the 5th November 2014 at completion of play.  Notices will be issued shortly.

Any Motions for inclusion in the AGM Agenda must be submitted to Rod Booth, Secretary, at least 28 days prior to the meeting.  Each Motion must be accompanied by Explanatory Notes. 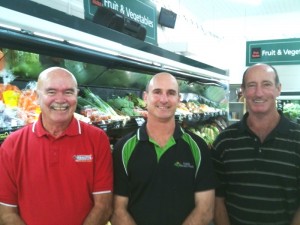 Pictured: Jim and Grant visited NTP sponsor, Joe Bartolo, at Cooroy Harvest Fresh to collect supplies for the sausage sizzle and raffle prizes for the day.