A reminder that next Wednesday, our Xmas lunch and final day for 2013 is a 7:30am shot gun start – a quick game of fun golf and then back to the club house for Xmas lunch, presentations and more fun. 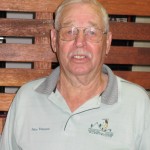 Congratulations to John Tomlins (left) for winning the 2013 Medal of Medals with a nett 60, John who plays off 28 had an exceptional day.

Our monthly medal was very well supported with 85 players taking part.  Some very good scores come in with Alan Blundell 63 taking out the A-Grade. The B-Grade saw 3 players come in with a nett 64 with yours truly winning on a count back from Lionel Willett and Ian McMullen. The C-Grade of course went to John Tomlins.

Bob Noble backed up last week’s ace, by scoring an eagle this week. I am not certain what hole it was on, but no doubt Bob will be more than happy to tell me all about it when he collects his 6 golf balls next week.

Our 4 Man Ambrose event next week has attracted a field of 100 players, so you should do all that is possible to avoid slow play.  It is not necessary to spend too much time looking for lost balls when playing in this type of event.

Next week will see our last official game for 2013, with the 1st game in 2014 being on the 15th of January. If you would like a game during the break, Wayne usually runs a ball competition from the bar.

I wish all members a Merry Xmas and am looking forward to a successful 2014. 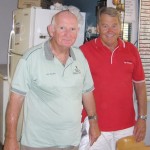