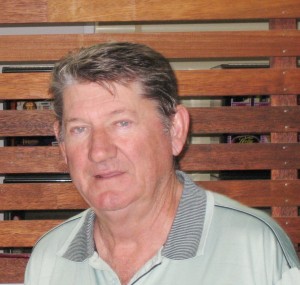 Another big week with 2 games played.  Monday’s Host Day with a visit from Mt Coolum drew a good number of players with a field size of 75.  Errol Radley (left) won the A-Grade with 41 points.   Errol found his true form without any outside influence from his normal playing partner Kevin Olsen.   Alan Emery continues to impress and won the C-Grade with 44 points.  Visiting player David Craswell just pipped our own Jim Henderson who finished with a credible 43 points.

Ron Blount, who normally turns up early, as he helps with the breakfast preparations, was not to be seen.   Just 20 minutes before we were due to tee off from the 11th, I rang Ron at home to see what the hold-up was.  Call it what you like but Ron had forgotten he was playing and was resting up at home.   Anyway, I don’t know how he did it but somehow he managed to get his gear together, drive to the course, pick me up from the clubhouse, drive to the cart shed, and we arrived at the 11th tee with time to spare.

Ron’s was not the only senior moment as we had 2 players turn up from Woodford, a month too early.  I’m not sure which one of them got the date wrong, but am sure it will be a talking point back at Woodford.  Lucky for them we had a game on, so I was able to let them join us for an enjoyable day.

New member Bob Watson is looking for someone to share a hire cart with him, please let me or Bob know if you would like to take up his offer.

I have recently been questioned about lowering the A-Grade handicap to 0-15.  This was mentioned at last year’s Annual General Meeting.   I addressed the situation then and made the decision not to allow any A-Grade player more than 1 shot per hole and therefore our A-Grade is from 0-18.   I will continue to monitor the number of A-Grade players taking part in each competition and if the field size ever increases enough to warrant it, I will be more than happy to lower the handicap limit.

And it looks like Kevin Olsen is up for a bag of wheat, as a couple of months ago, I was witness to Kevin saying to playing partner Errol “ if your handicap ever drops below mine, I will buy a bag of wheat and donate it to the Salvos”.   Errol, now off 15.5, has called for payment as Kevin lags behind him on 15.8.

The Championship will be played in A, B, and C Grades (Stroke):

Qualification: players must have played in six single events this year.

In case of a tie, there will be a play off over 18 holes the following week.

Our next Working Bee will be held on Tuesday the 12th of November.

Thanks to Grant for donating all the prizes including run down and NTP balls from his past winnings – hardly used, low mileage only driven to church by a little old lady on Sunday – oops wrong story – Grant is buying a new car and that was his sales pitch to get the best price on his trade-in.