I would like to thank all those who attended our final official competition day of 2013. The day was a huge success due to the large turnout of members and invited guests.

Your support of the golf ball raffle shows how much pride our members have in our golf club.  You should soon see the results in the way of a new “Hole in One” board.

Thank you Kevin Tonkin for donating back the dozen golf balls that you had purchased.

It was nice to see Ken Morgan make the trip back, and thank you for sharing some of your latest jokes.

Ron Blount also deserves a mention for helping to set out the Tee markers on Tuesday afternoon and then returning them to their normal positions after our game.

Our 1st game in 2014 is our Monthly Medal on the 15th January, it will be an 8.00am shotgun start, and the nomination sheet will be at the club in early January.

On behalf of the Vet’s Committee I would like to wish our members a happy and safe Xmas and I look forward catching up in 2014.

Congratulations to our Course Superintendent, Kirsty Herring, for achieving her Associate Degree in Applied Science from UQ – a great reward for 4 years hard work.

Cooroy Golf Club Patron, young Jim Dunstan entertained us with his usual well told jokes.  When asked how old he was Jim’s reply was quite precise – 95.75 years – must be all that army training. 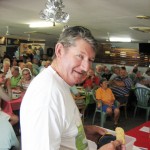 We had some Breaking News during lunch  …….“Kevin Olsen finally pays up on bet” – well almost!  Rather than a bag of wheat Kevin presented Errol (left) with ….. wait for it……a Weet-Bix in a small bag.

It was great to have members who haven’t been able to play golf recently for medical reasons join us for our final official get together for the year.  A special mention for Len Highland who had to pass on lunch as he was heading off to hospital that day for some medical attention.

As Grant revealed on Wednesday you really only get to know someone when you play golf with them.    Well you get to know them even better if the person is a golfer unable to play but joins you for a round as an observer.  Brad Lavenders’ recent hernia operation prevented him from playing so he rode around with our group of 3. Brad’s comments were honest, succinct and to the point – mostly #%$## drive, or #%$## putt.  Brad’s final assessment of our performance was a little more mellow – could do better, room for improvement – but we had a drink with him anyway.  The quicker he gets back to playing golf the better! 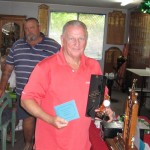 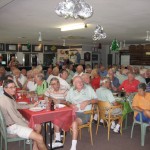 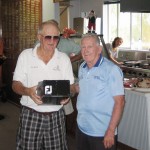 Bob Noble looking very pleased with his Hole-in-One prize and mounted ball.  Big Kevin Tonkin standing behind doesn’t look quite as pleased about Bob’s achievement and seemed determined to stop anyone from getting to the front to collect their prize.

4 Man Ambrose teams watching hopefully as scores go up while waiting for lunch in a packed club house.

Photos of all our Annual Trophy Event winners are on the new Vets Noticeboard.

Merry Xmas and a happy and prosperous 2014.

This is the final Vets Newsletter for 2013.